I have been on an old movie watching kick lately and I tend to lean towards the comedies. I love the era when vaudeville is still transforming in to movie performance. I also love the hat era. Everyone used to wear hats and I love it!

Dorothy Lamour is a rich woman whose evil, fabulously dressed Auntie, Gale Sondergaard, is hypnotizing her into marrying a fortune hunter. You know, like you do. Two showbiz stowaways on a stop her from leaping from the ship, in fabulous white gown, as her own erratic behavior has caused her to become suicidal. Many people are hyponotized, the Andrews Sisters sing with Bing, and Bob dresses up as Carmen Miranda. Essentially everything I enjoy in a silly movie! 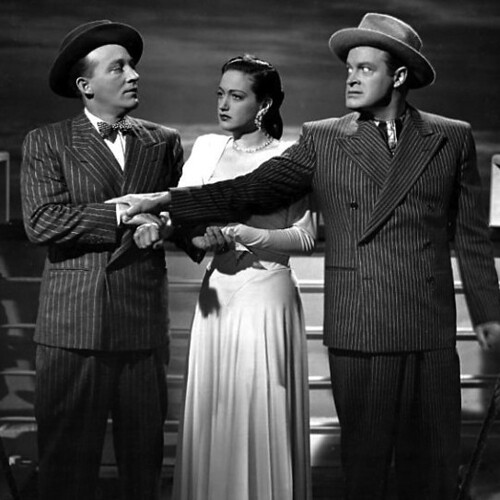 The dress she is going to commit suicide in. It’s gorgeous! 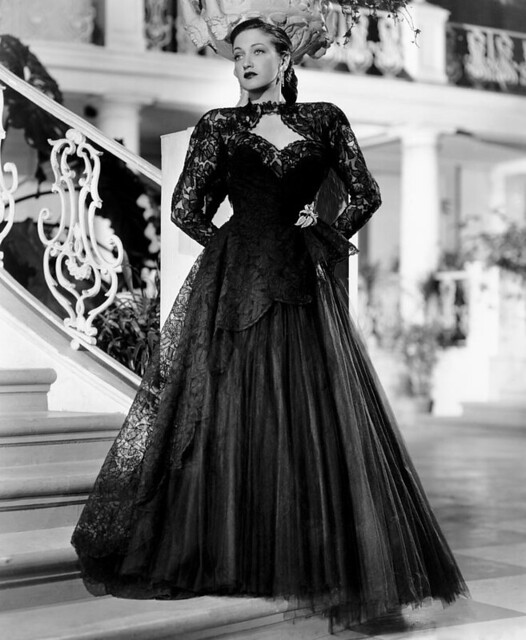 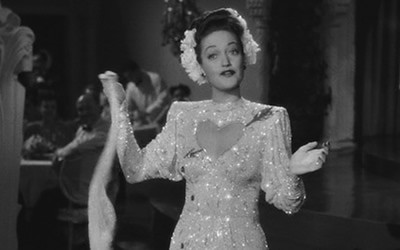 Look at that heart neckline! I want! 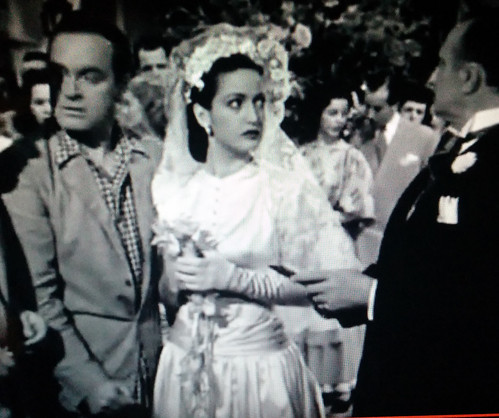 It is hard to see in this screenshot but that silk wedding dress is 40’s fantastic. 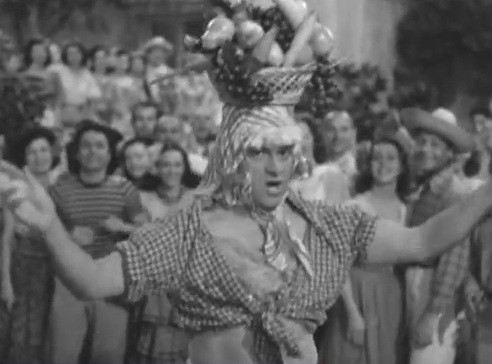 Dean Martin and Jerry Lewis meet a woman who has just inherited “Lost Island” and fortune hunters are after her to sell it because it is haunted. They decide to help and on the ship on the way to the island they perform with Carmen Miranda. Let me just say Carmen Miranda was unbelievably charming and funny. She held her own and even stole the screen from two male comedy superstars. She sings, dances, and plays bongos, backwards and in high heels. Talent. 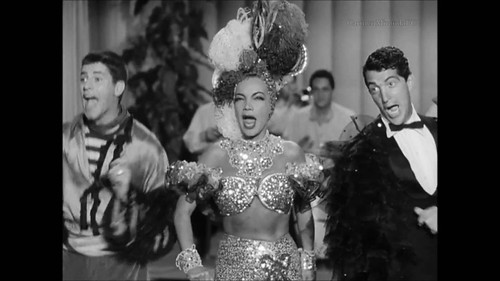 Gorgeous and that headpiece is everything. 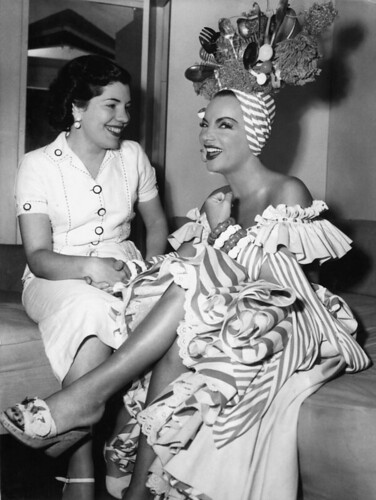 For the song “Enchilada Man” Carmen wears a headpiece with all sorts of kitchen utensils. YES! 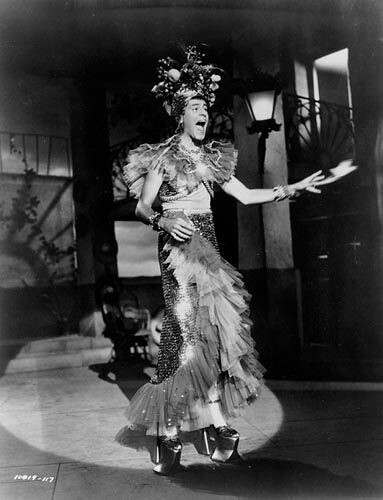 Another Carmen Miranda drag bit. Look at those shoes!

Dean Martin is a comic book artist at the time when comic books were being hailed as detrimental to the moral fiber of American Youth. He meets Dorothy Malone who is a female commercial illustrator and that goes as you might think. 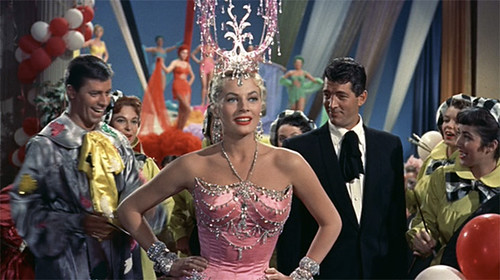 There are a lot of colorful numbers throughout this picture.

Jerry Lewis, as always is his bumbling friend, Eugene. The real star of this movie is totally Shirley MacLaine. She doggedly pursues Jerry Lewis and is completely adorable and hilarious. 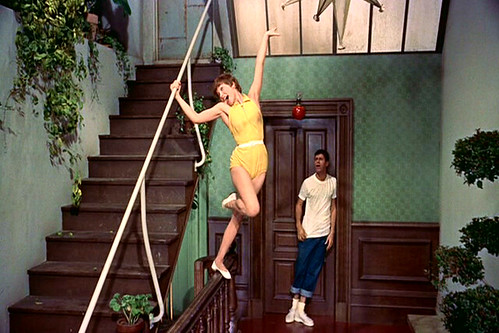 I love this sunbathing suit with a collar and a belt. It’s unusual! 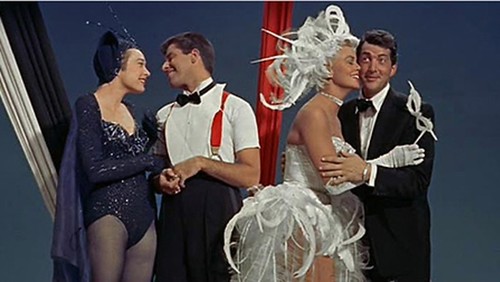 Another colorful number at the end where Shirley is dressed as a comic book character.

Honestly this is one of my all time favorite movies. My parents and I used to watch this on movie night around Halloween. It’s one of those goofy, comedy-horror movies. I love those! Helen Parrish plays a wealthy heiress (this is really a theme here) who is about to turn 21 and inherit a fortune. She throws a birthday party at her mansion, Kay Kyser and his band come to play, and they meet her aunt’s fortune teller, Bela Lugosi. They soon find out there is a plot to get rid of Janice to get to her money. There are about 15 girls in gorgeous 1940’s party dresses and that alone is amazing to see! 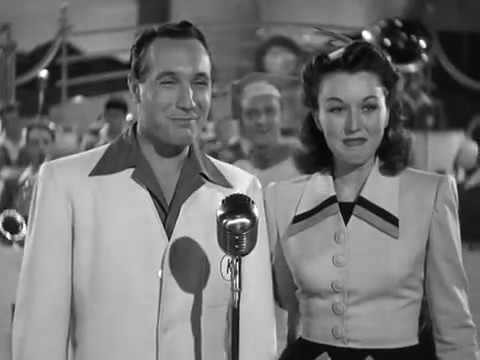 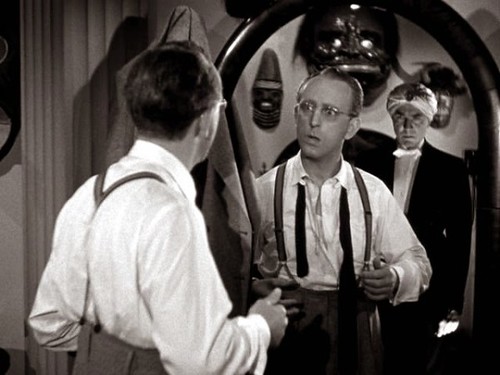 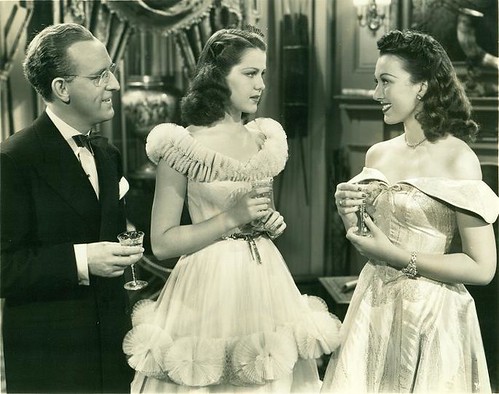 These are only 2 of the party dresses! Swoon! 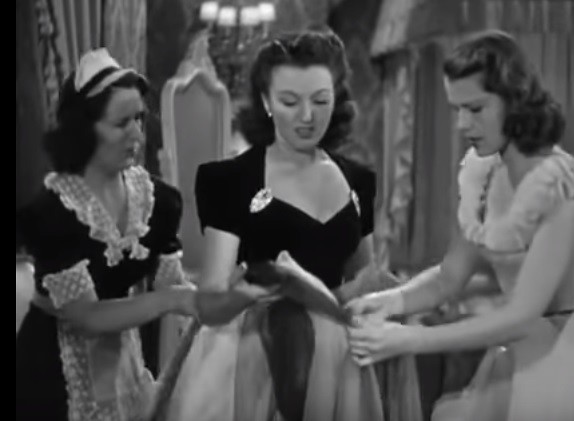 Love that neckline and detailing!

There are just all kinds of fabulous dresses in this movie. The plot line is essentially that Patsy Kelly is John Barrymore’s agent and she and Kay’s agent get together and decide that the two should collaborate on Shakespeare. Neither is particularly excited about it. No heiresses here. Patsy Kelly is under-rated in this movie, as is Lupe Velez. Velez plays a female bull fighter and John Barrymore’s on and off again paramour. 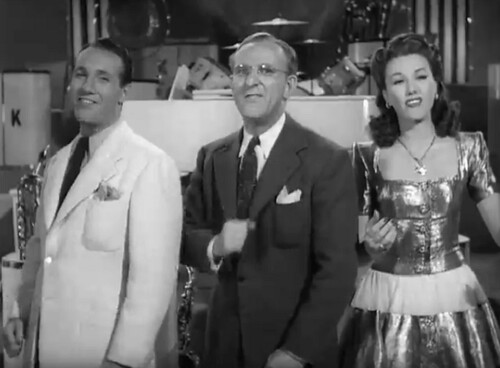 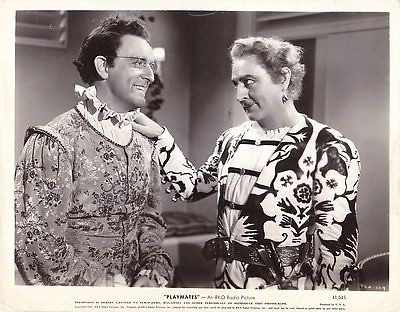 There is some great men’s costuming and pattern matching. 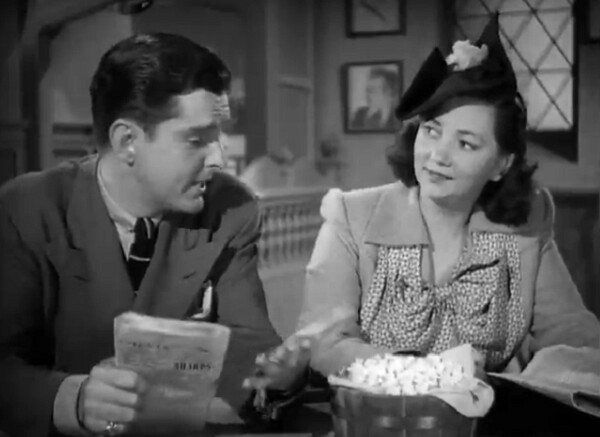 The managers meet. Patsy Kelly plays a fast-talking female manager whose is put upon by a grander-than-thou John Barrymore. Why don’t we wear hats anymore? 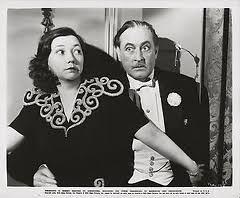 I would wear this dress! It’s terrific! 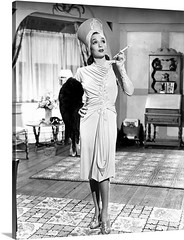 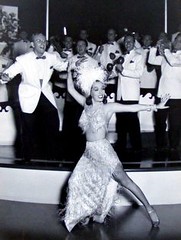 She performs a dance number in this fringe fantasy!

You made it to the end! Congratulations! I’m always open to movie suggestions! What old movies do you like?

7 thoughts on “Watching Old Movies, And Drooling Over the Clothing”